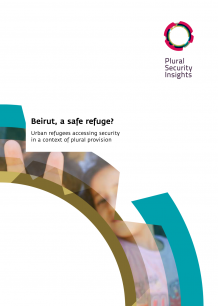 In contexts of plural security provision, security is produced and distributed by an array of actors asserting claims on the use of force, operating simultaneously and with varying relationships to the state. This paper describes how a vulnerable urban population, Syrian refugees in Beirut, Lebanon, realises its security interests within plural provision arrangements. Since the beginning of the Syrian civil war, as many as 1.5-million Syrians have fled into Lebanon.

Fieldwork in the Beirut neighbourhoods of Naba’a and Sabra revealed that refugees experience a precarious security environment in the city, characterised by constant fear of harassment and detention, lack of protection, and limited mobility. Research identified a diverse repertoire of strategies upon which Syrians draw to access security, from avoidance to reliance on in-group problem-solving and affiliation with sympathetic local security providers.

The paper concludes that Lebanon’s current policy framework exacerbates the vulnerability of Syrian refugees, and that the very nature of security pluralism in Beirut is unlikely to promote equitable distribution of security as a public good, especially to newcomers. It proposes changes to the regulatory and security regime applied to control Syrian communities, and advises the Lebanese state to address the security gap for refugees within the parameters of the existing consociational power-sharing framework.