The ALF President and Executive Director on 14th of September in Cairo met the Minister of Foreign Affairs, Sameh Shoukry 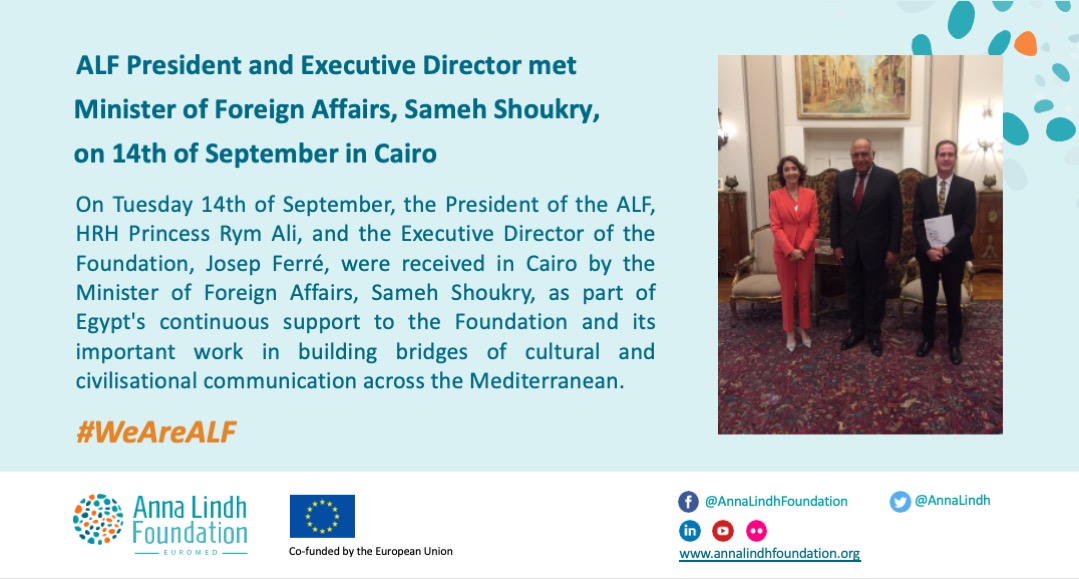 On Tuesday 14th of September, the President of the ALF, HRH Princess Rym Ali, and the Executive Director of the Foundation, Josep Ferré, were received in Cairo by the Minister of Foreign Affairs, Sameh Shoukry, as part of Egypt's continuous support to the Foundation and its important work in building bridges of cultural and civilisational communication across the Mediterranean.

The Minister Shoukry expressed during the meeting Egypt's support for the new leadership of the Foundation. An emphasis will be put on Egypt's provision of all forms of support to the institution to carry out the role assigned to it, while making all efforts to facilitate the work of the institution, which Egypt hosts in Alexandria since its establishment in 2004.

The Minister Shoukry emphasised the Egyptian priorities within the framework of the Foundation’s work, among others, focusing on the intellectual confrontation of negative phenomena such as terrorism, extremism and hate speech, as well as the causes of the phenomenon of illegal immigration, in addition to the interest in strengthening communication programs among youth, supporting knowledge and building capacities to enhance communication between cultures.

The President of the Anna Lindh Foundation, HRH Princess Rym Ali, expressed her appreciation for the Egyptian support to the Foundation's work and aspiration to achieve the goals entrusted to it as a bridge for the cultural and cultural dialogue in the Mediterranean Region.