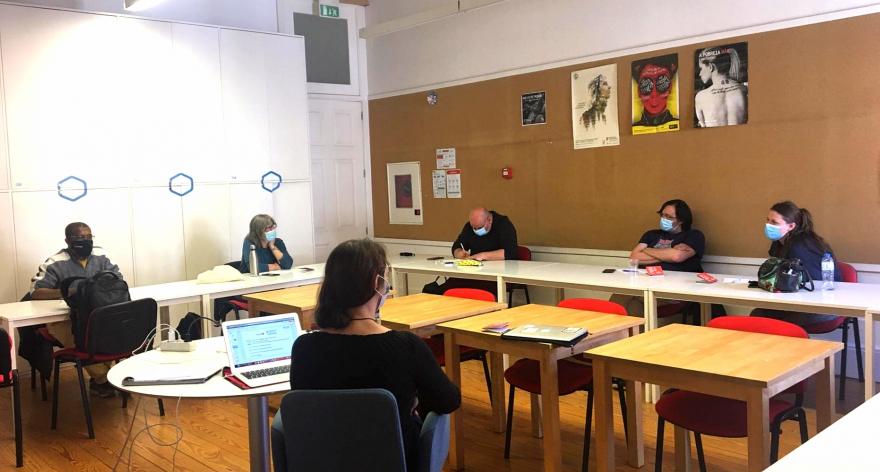 The Portuguese Network was formed in 2005 simultaneously with the creation of the Anna Lindh Foundation itself.

The Portuguese network is rich in diversity, from the geographical point of view (from medially urban areas and predominantly rural areas), public and non-public sector, to fields of activity. Aequalitas Association was elected on June 20th, 2021 to coordinate the Anna Lindh Foundation's Portuguese network, composed of 50 members from the most diverse areas of activity in the country's cultural and social life.

The Portuguese Network was formed in 2005 simultaneously with the creation of the Anna Lindh Foundation itself. It grew from the initial 11 to 50 organizations, expanding the areas of intervention, gradually consolidating the notion of “network” among its members and looking for new forms of intervention to disseminate the ALF values ​​and objectives.

Aequalitas intends to guarantee the continuity of the previous work of MEDesTU, MultiCulti, ACERT and Centro Nacional de Cultura through persistence in the work of motivating, stimulating and expanding the participation of its members, but also in expanding the network (over 40 members, expanding as well as the possibilities of financing its members) to improve the possibility of exchanging collective construction processes, giving increasing importance to interculturality and dialogue, which today constitute phenomena that require a special understanding of social and community relations at a global level.

Portugal due to its history has always been a society that has been open to the world since 1450, so there have always been different cultures influencing Portuguese culture, as ours has influenced other cultures. For several centuries the challenges were great. Currently there are several challenges in our society such as the integration of generations already born in Portugal who still do not feel integrated, the perpetuation of the migrants' cultures of origin without getting lost in a country with different cultures and the integration of new migrants who come from different origins. very different from the previous ones and that there are other integration problems that those of the past did not have. Therefore, as more and more people arrived in the country, the state created a strategy for integration and dialogue with these communities, the most recent of which was on February 27, 2014, created by the government of Prime Minister Pedro Passos Coelho (as we can see in Decree-Law Decree-Law No. 31/2014). In this decree, supported by information from the High Commission for Immigration Intercultural Dialogue, which has a member of the government in the direction, its mission is to collaborate in the definition, execution and evaluation of public, transversal and sectoral policies on migration, relevant to the attraction of migrants in national, international and Portuguese-speaking contexts, for the integration of immigrants and ethnic groups, in particular Roma communities, and for the management and appreciation of the diversity between cultures, ethnicities and religions. To reach this end, several strategies were outlined, which are described in the decree-law, such as: • Promote Portugal's international image as a migration destination;

• Promote and encourage the reception, integration, participation and professional and civic training of immigrants and their descendants, namely through the development of transversal policies, centers and offices to support immigrants that provide an integrated response from public services; • Promote dialogue, innovation and intercultural and interreligious education, namely through support for associations and actions to value positive interaction and cultural diversity, within a framework of mutual consideration and respect for legal and constitutional norms;

• Many others To implement and put into practice these strategies, the High Commission for Immigration,

Intercultural Dialogue has several initiatives such as the distribution of funds to associations that already work directly with immigrant communities, migrant support offices to handle all the documentation needed to live in the country. and professional insertion.