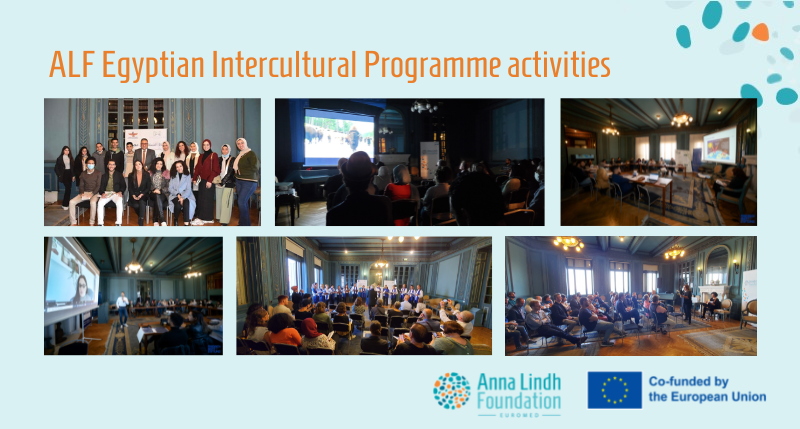 In its new strategy to establish a deeper connection between the Foundation’s mandate for promoting intercultural dialogue and its leading role in mobilising the civil society and networking in Egypt, the ALF put in place the Egyptian Intercultural Programme which aims at supporting cultural initiatives and events, as well as fostering synergies and joint partnerships with the ALF Head of Network Institution in Egypt, the members of the Egyptian ALF National Network, CSOs, local and international cultural and educational bodies, Egyptian Authorities, consulates, and Diplomatic Missions of the Euro-Med countries.

Within this new Programme, the Foundation seeks to make of its Headquarters a space and a platform for intercultural exchange by promoting initiatives of cultural, artistic and civil society actors who are involved directly with the public, to put the ALF’s mission into action.

On the 18th of May, the ALF co-organised a literary and musical café of "Écrire la Méditerranée" (Write the Mediterranean) Festival, organised by the French Institute of Egypt in Alexandria between 17 and 19 May. The event brought together the Syrian poet Rasha Omran and oud player Huda Asfour who delighted the audience with their performances.

On the 20th of May, the ALF hosted a cultural talk of the Egyptian international jewellery designer Azza Fahmy, in which she spoke about the heritage of silversmiths in Siwa and how to revive these crafts with the support of civil society with the aim of preserving common heritage.

On the 23rd of May, the Swedish documentary "Breaking Boundaries: The Science of Our Planet" was screened at the von Gerber house as part of the “Europe Goes Green Films” Festival in Alexandria, organised in the framework of the celebrations of the Europe Month in Egypt.

On the 31st of May, the Foundation hosted a networking reception event organised by GIZ Egypt and the Capacity Building through Urban Infrastructure Development (CBUID) project team, which was an opportunity to discuss and exchange new ideas on collaboration for holistic development in Alexandria and beyond.

Further events will take place at the von Gerber house during the month of June including a musical performance of the Choeur Francophone du Caire as well as activities related to climate change and COP27.

If your organisation is interested in organising its activities/initiatives at the Anna Lindh Foundation Secretariat in Alexandria, please contact us at info@annalindhfoundation.org.